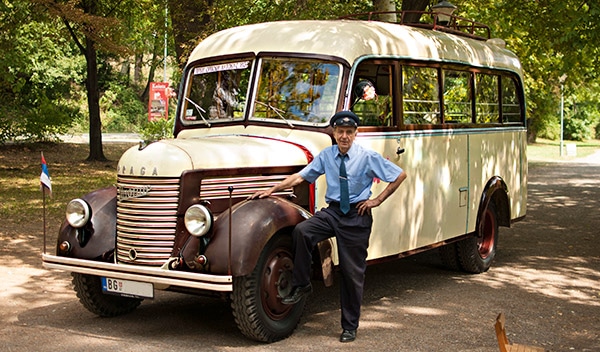 Czechoslovakia or Yugoslavia don’t exist anymore, but this bus still carries passengers, even though it has run into its ninth decade. It has survived World War II. One of the first buses in the region was produced in Rakovica after IMR bought a license from the Czechoslovakian company Prague in 1938. At the time, production in Czechoslovakia was largely suspended due to German occupation. Today, this is the only copy that is in running order (not taking the second one, which is in the Czech Automobile Museum), it’s won the first place at the 2005 Old Vehicles Exhibition in Bratislava.

The bus is powered by the simplest six-cylinder petrol engine located in the front of the vehicle, with a displacement of 3,600 cubic meters and 70 horsepower. Therefore, it can reach a maximum speed of 55 kilometers per hour. It is made mostly of metal, while the roof is made of wood. “Montevideo” movie crew has had unforgettable moments in it, and we believe you will too if you decide to make this classic vehicle your choice for the prom, bachelor or bachelorette party.

This website uses cookies to improve your experience while you navigate through the website. Out of these, the cookies that are categorized as necessary are stored on your browser as they are essential for the working of basic functionalities of the website. We also use third-party cookies that help us analyze and understand how you use this website. These cookies will be stored in your browser only with your consent. You also have the option to opt-out of these cookies. But opting out of some of these cookies may affect your browsing experience.
Necessary Always Enabled
Necessary cookies are absolutely essential for the website to function properly. This category only includes cookies that ensures basic functionalities and security features of the website. These cookies do not store any personal information.
Non-necessary
Any cookies that may not be particularly necessary for the website to function and is used specifically to collect user personal data via analytics, ads, other embedded contents are termed as non-necessary cookies. It is mandatory to procure user consent prior to running these cookies on your website.
SAVE & ACCEPT